For every Australian cricketer, getting the Baggy Green is an important objective. Earning a place in the Test squad is one of the highest aspirations for the Aussies. Glenn Maxwell recently earned a return to the team’s Test side for the games in Sri Lanka. Since 2017, Maxwell has not played Test cricket. Hence, Maxi revealed the condition of his hat, which has now been unused for a while now. In this article, we take a look at what Glenn Maxwell had to say about the condition of his Baggy Green.

Glenn Maxwell’s Baggy Green is not in good condition

Speaking to Cricket Australia, Glenn Maxwell revealed that his wife brought out the Baggy Green from the bag and it was not in great condition. He said,  “She [Glenn Maxwell’s wife] got it out of the bag and it had completely fallen apart. So I’m going to need a new one over here.”

The all-rounder continued, “It’s happened to a few of the boys. Unfortunately, when it goes in the bag and it’s wet, it doesn’t dry that well when you leave it in the bag. It’s absolutely destroyed.” Maxwell finished, saying, “I’m probably going to have to put it in a glass case and leave it there I reckon. I’ll see if I can get it fixed when I get home but at the moment, it’s probably a bit too late for that.”

An opportunity for Maxwell to become an all-format cricketer

In recent months, a few T20 specialists such as Jonny Bairstow have done well in Tests. Glenn Maxwell is also someone who is in the same mould. The player is certain of his spot in the shorter formats. However, Maxwell would now aim to do well in Tests.

Maxwell is a good player of spin. Hence, his skills would be useful when Australia plays in the subcontinent. Add to this, the player’s off-spin is also something that Pat Cummins can make use of. Therefore, Maxwell will be keen to do well against Sri Lanka. 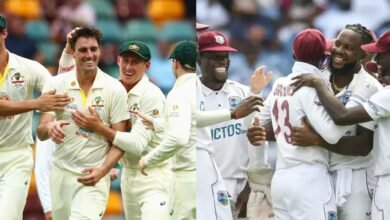