The Pro Kabaddi League has brought about a revolution in the sport of kabaddi. Earlier, this game was majorly played in the rural regions of India. There are many benefits of playing this spot, which is why even the families backed the young kids who played on the mud at that time.

Star India and Mashal Sports launched the Pro Kabaddi League with an aim to take the sport from mud to mat. The experiment proved to be a major success as the tournament got unprecedented viewership numbers in the first few seasons.

Many great raiders came into the limelight with their splendid performances in the PKL, and one of them was Ajay Thakur. The former Indian kabaddi team captain played for the Bengaluru Bulls in the first season. He was their star raider and his trademark running hand touch skill made him a top player in PKL.

Subsequently, he played for the Puneri Paltan, and currently, Ajay Thakur is the captain of the Tamil Thalaivas in the Pro Kabaddi League. Talking about Ajay Thakur, he played a significant role in the Indian kabaddi team’s 2016 World Cup win at Ahmedabad.

He has scored 811 points in 115 Pro Kabaddi League matches. His best season came in 2017, when he scored 213 raid points for the Chennai-based PKL franchise. Unfortunately, Thakur had his worst season last year, as he managed only 58 raid points in 13 matches.

Nevertheless, the Himachal Pradesh-based player has won many hearts with his raiding performances in the PKL. Here’s a look at his top five best outings as a raider in the Pro Kabaddi League’s history.

The Gujarat Fortune Giants and the Tamil Thalaivas were two teams who made their PKL debut in the 2017 season. Ajay Thakur captained the Thalaivas. However, they could not live up to the hype in their first few matches.

While a Super 10 is considered a milestone for a raider like a century for a batsman in cricket, Ajay Thakur’s match-winning eight raid points against the UP Yoddha hold a special position in his career.

As mentioned ahead, the Tamil Thalaivas were not having a great season in 2017. They battled the UP Yoddha in an away match, and the home team dominated the proceedings for a major part of the contest. However, Thakur turned the tables by scoring five points in the last minute as Tamil Thalaivas won 34-33.

A late super raid in the match turned the game in his team’s favor as Tamil Thalaivas won the game by 34-28.

Making his debut in the Pro Kabaddi League, Ajay Thakur kicked things off in grand fashion against the Dabang Delhi KC. He scored 13 points for his team Bengaluru Bulls and supported his captain Manjeet Chhillar to perfection.

Bengaluru bulldozed Delhi by 42-28 in that match, with Thakur and Manjeet scoring 28 points together for the Bulls.

Tamil Thalaivas struggled in their debut season. On the other side, the Patna Pirates were the two-time defending champions and they eventually won the 2017 season as well. However, when Patna battled the Thalaivas in their last league match, they suffered an upset defeat.

Ajay Thakur’s 14 raid points surprised Patne Pirates as the Thaliavas ended their season with a 40-37 win. 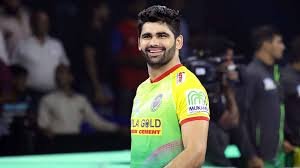