On Wednesday night at the Allianz, France will take on Germany in the most awaited game of the tournament so far. France are the outright favourites for the tournaments due to their status as the world champions. Benzema’s shock inclusion after five years has only added to the expectations surrounding France. In this article, we will predict France’s playing 11 and tactics vs Germany.

In football, tactics and playing 11 differ according to the opposition. Hence, we will first take a brief look at Germany’s tactics.

Joachim Low’s side are nowhere near the all-conquering 2014 version but they do have great talent in their squad. Low is expected to play the 4-2-3-1 formation due to the return of Thomas Muller. Germany have four world-class midfielders in Gundogan, Kroos, Kimmich and Goretzka. However, fitting them all in the playing 11 could be a big headache.

Antonio Rudiger and Mats Hummels are their best defenders but they do not have enough quality at full-back. Their attackers are all young and fast but it must be seen whether they can perform at the highest level.

Lloris’ might not be among the best keepers in the tournament but he is an incredibly efficient shot-stopper. Tottenham would have conceded more goals if not for his presence at the back. If he wins EURO 2020, he will join Casillas as the only keeper-captains to win World Cup and EURO in succession.

Lucas Hernandez and Pavard both joined Bayern Munich in 2019 but have not played a lot of football since. Hernandez has been used a centre-back by Munich and it can be argued that Lucas Digne is a better option. However, both Pavard and Hernandez are very solid defenders and they leave little room for counter-attacks.

Varane and Kimpembe form an effective pairing at the heart of the defense. Both of them have the pace to track back and defend in case of counter-attacks. With Zouma and Upamecano warming the bench, even a small mistake could result in an ousting from France’s playing 11.

Kante and Pogba form one of the most devastative midfield pairings in the world. Kante has been phenomenal for Chelsea while Pogba always ups the ante while playing for France. Amazingly, France have never lost a game when Kante and Pogba have started together.

Rabiot has endured much criticism at Turin but his energy and ball carrying ability will get him to France’s playing 11. He is also versatile and can play on either side of Kante.

France have a truly formidable trio at the front with the return of Benzema. Benzema has been phenomenal for Madrid ever since the departure of Cristiano Ronaldo. Benzema is more than just a penalty box striker and has an exquisite skill set and solid work rate.

Antoine Griezmann had a much better second season at Barcelona, after a disappointing 19/20 season. In EURO 2016, Griezmann carried France to the final but missed out on the trophy by a whisker. With an even better squad this time, Griezmann could very well add a EURO winners’ medal to his achievements.

Although France have quality across the pitch, all eyes will be on Kylian Mbappé. By repeating his heroics at the World Cup, Mbappé could well become a certified legend in France, at the age of just 22. Five Players Who Returned To Manchester United For A Second Stint 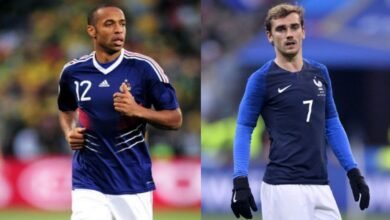