Indian-origin USA player Unmukt Chand is all set to play in the Bangladesh Premier League. The right-hander was picked by Chattogram Challengers in the players’ draft that took place on Wednesday (23rd November). Notably, he registered himself for the league last week.

He will be part of the team, that has the likes of Max O’Dowd, Vishwa Fernando Ashan Priyanjan, Curtis Campher Taijul Islam, Ziaur Rahman and Mehedi Hasan.

Unmukt Chand led India to the U-19 World Cup victory in 2012. The Men in Blue defeated Australia in the final. The Delhi batter led from the front and scored unbeaten 111 runs. After that, he continued his form in the domestic circuit but failed to make an impact in the IPL. He called time on his cricketing career in India in 2021 and moved to USA.

He stated that he will continue playing cricket for the country. He, however will be eligible to play for the USA in 2024 as he has to spend 10 months in every year in US for the next which would qualify him for playing the nation. Earlier this year he created history as he became the first men Indian batter to be part of the Big Bash League. The right-hander played for Melbourne Renegades.

Before that in 2021 he had formally retired from all formats of Indian Cricket. That’s crucial part.

Not an indian player any more..he retired from indian cricket for his greed..thinking as if he was a superstar player..we find many like unmukt chand and far better in our domestic circuit grinding hard and waiting for their opportunity, not like this greedy unmukt chand..

No. He is the first United States of America's player to get a Bangladesh Premier League contract.

He’s not an Indian player anymore as he left country for US ?

He is a man of firsts. First U19 WC winning captain to have never played for India https://t.co/ag3q3SFr62

He is an American. https://t.co/CrGEwgiwLL

Is he Indian ? I thought he was from the USA now

He is American now 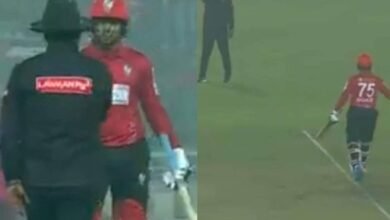 “Y he is screaming,” Twitter reacts as Shakib Al Hasan gets furious on the umpire for not giving wide during BPL 2023