In India, after the emergence of the Indian Premier League, the stepping stone to Team India has become one-dimensional. Be it any format of the game, an India debut without at least an IPL cap is almost unheard of. However, there could be a few players who might change that. In this article, we take a look at three Indian players who could make their international debut before their IPL debut.

Arzan Nagwaswalla is one of the Indian players who could make their international debut before their IPL debut. The left-arm seamer has been on Team India’s reserves for a few months now.

India has a few home Tests scheduled in the upcoming months, and there could be workload management for the first-choice pacers. India anyway needs a left-arm pace option in Tests going forward. Hence, it might be possible that Arzan will make his Team India debut. It needs to be noted that he is yet to play in IPL. He has been with Mumbai Indians as a net bowler but is yet to earn a contract so far.

Abhimanyu Easwaran was in the Indian squad for the tour of England in 2021. The West Bengal batter has been in fine form over the past few seasons in Ranji Cricket.

The spots in the batting department are up for grabs in the next few tournaments. Although India might try out other options, Easwaran can also fancy his chances if there is an injury or if someone is rested. The player, who has an average of close to 40 in T20 cricket, is yet to play in IPL. Therefore, he could make his India debut before playing in IPL.

Priyank Panchal finally received his India call-up after toiling almost for a decade in Ranji Trophy. He was included as Rohit Sharma’s replacement for the South Africa Test series.

For the experience that he offers, Priyank could also bag an IPL contract for the upcoming season. However, before that, there is a chance that he could make his India debut. Especially with the likes of Cheteshwar Pujara and Ajinkya Rahane struggling, Panchal might wear his India cap in the next few months. 5 Pacers Who Could Make Their India Debut In 2022 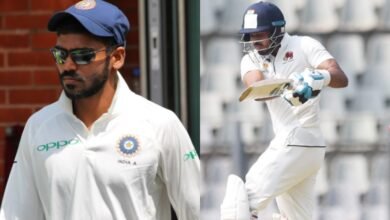 5 Indian Players Who Could Earn A Test Spot Before 2022